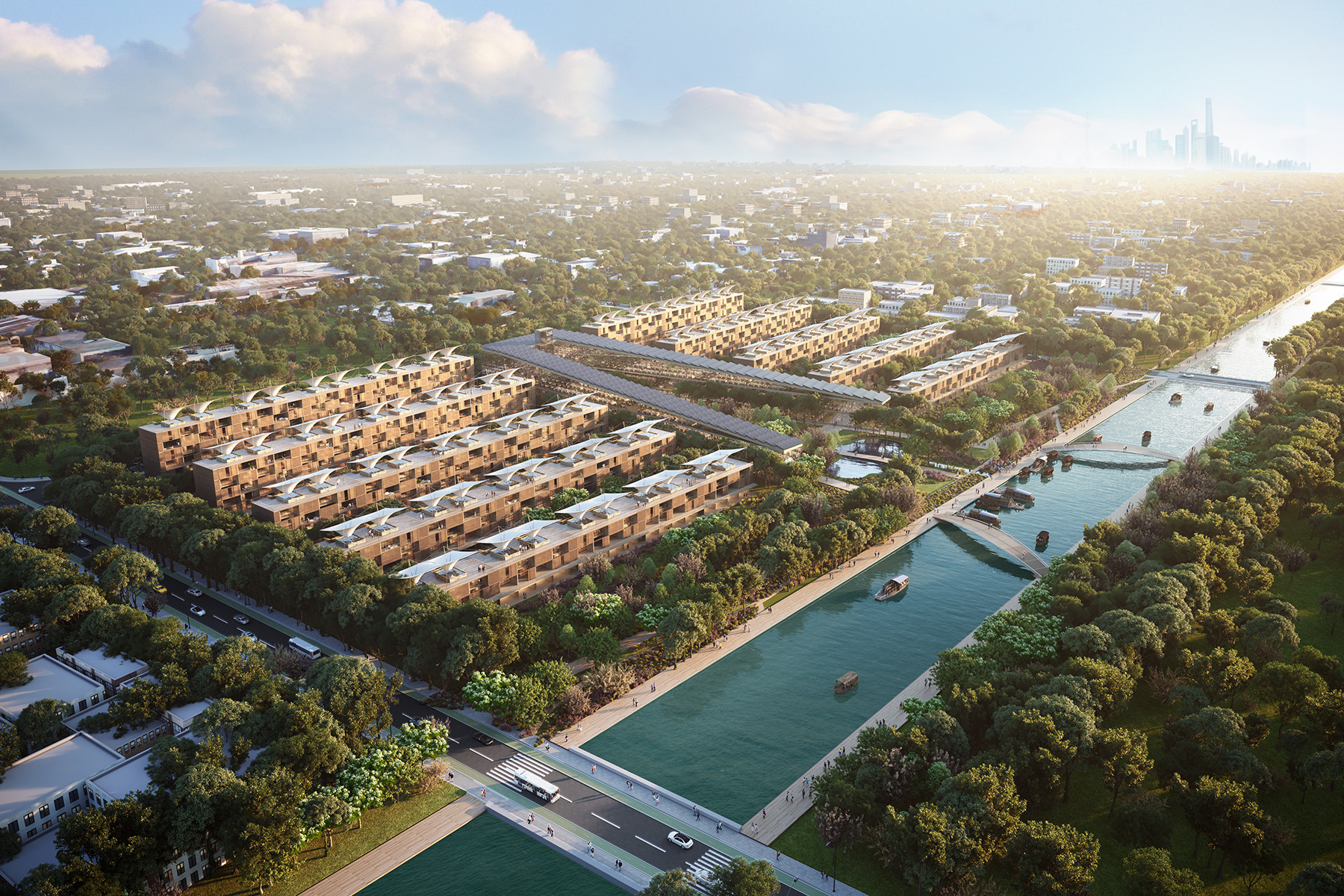 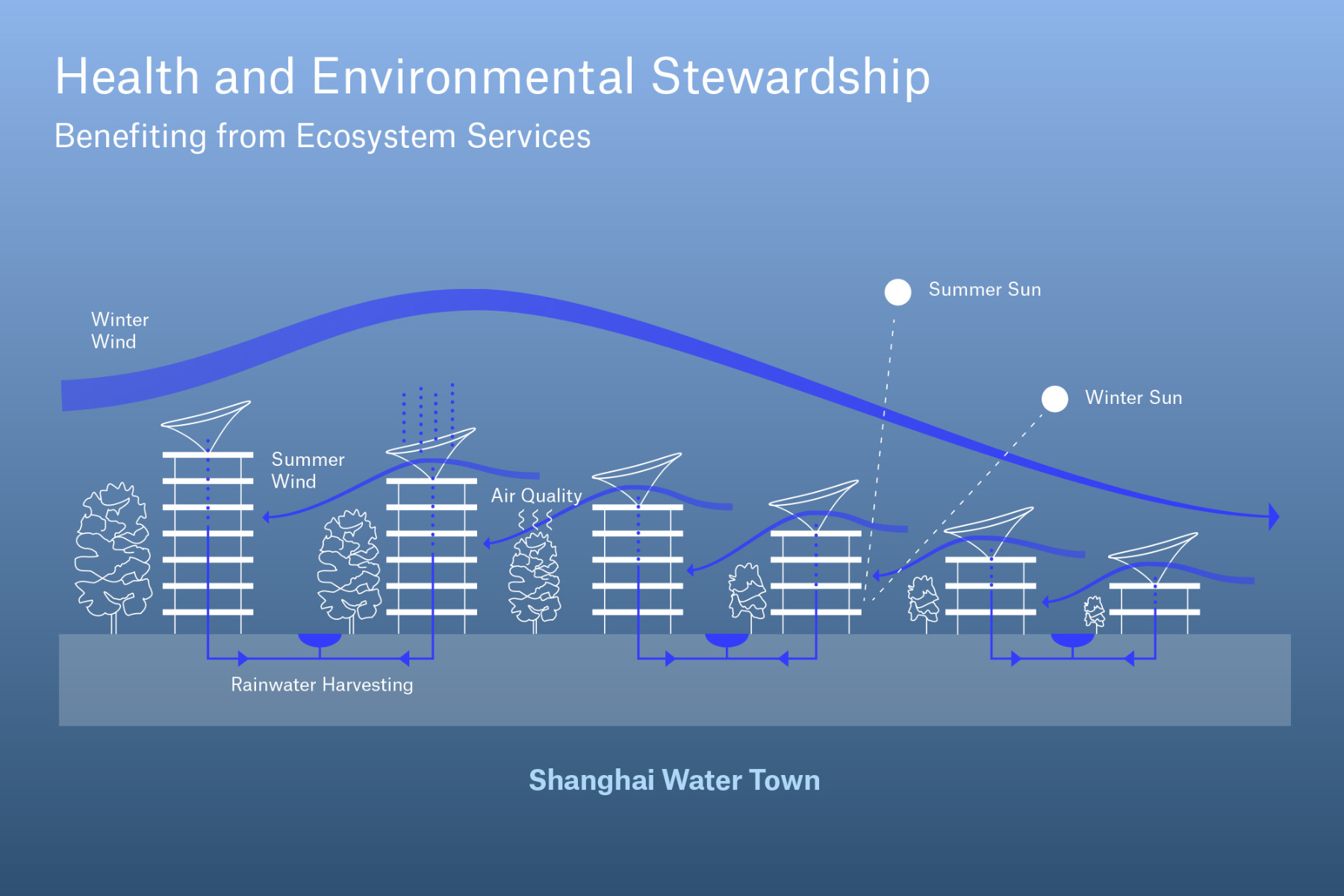 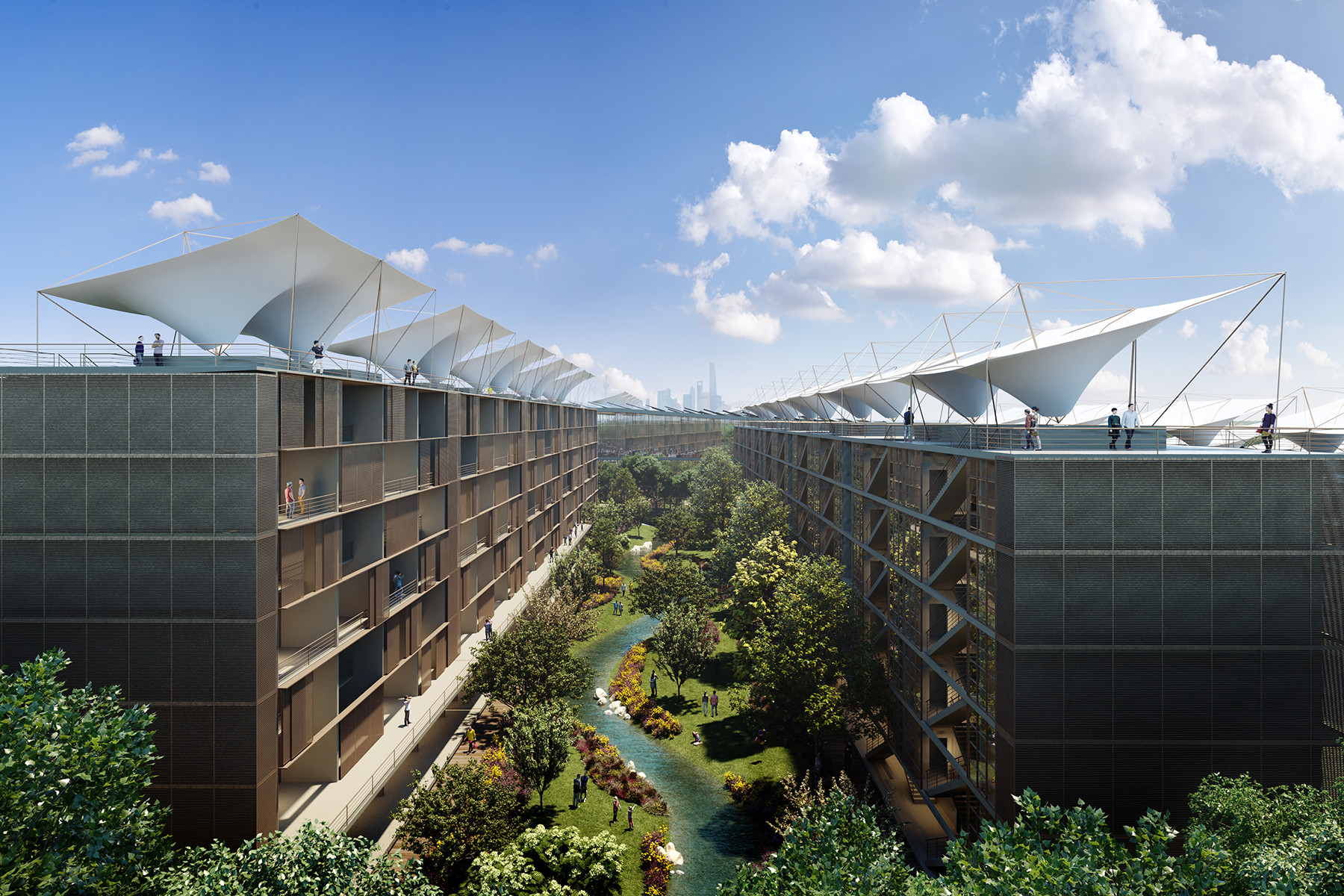 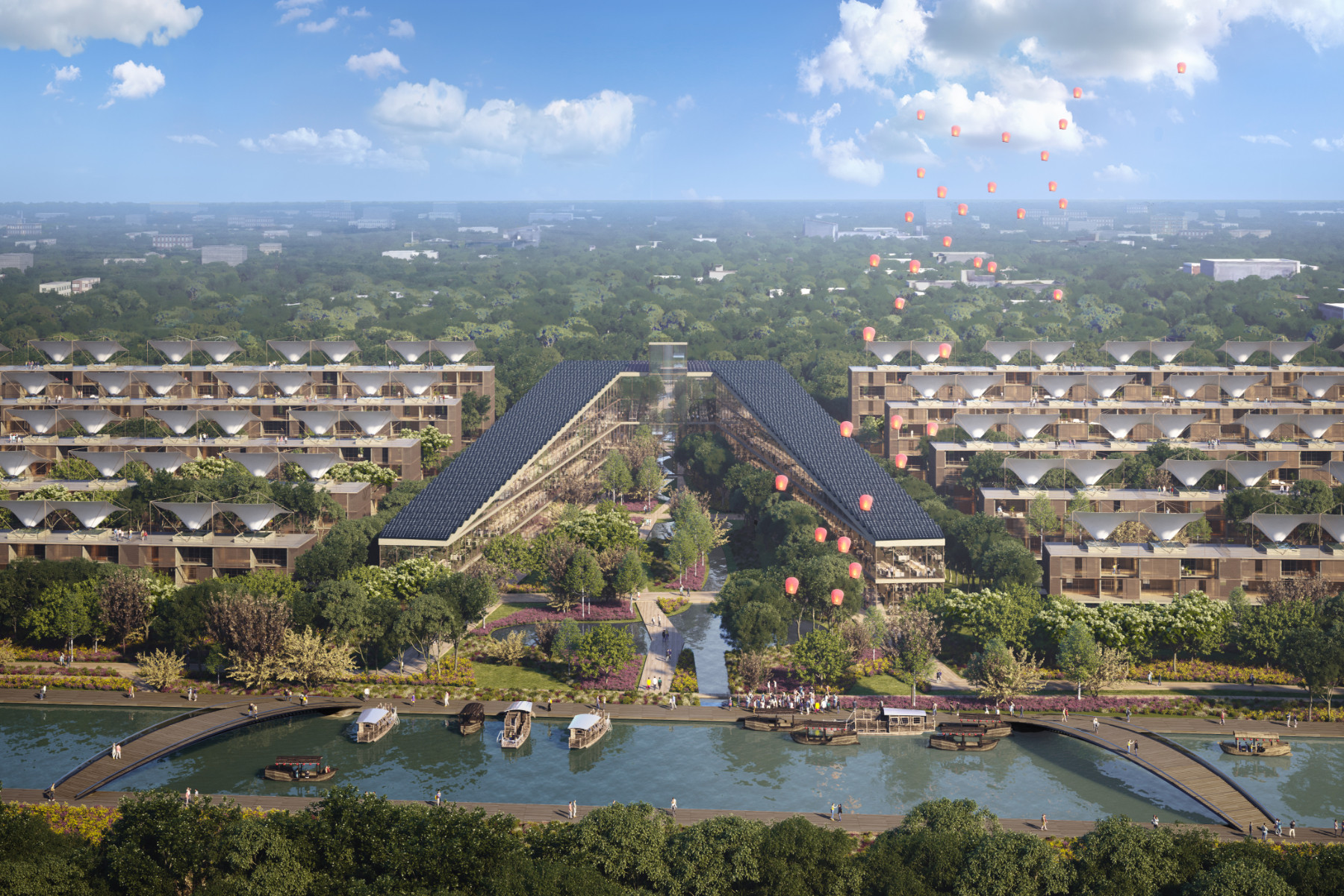 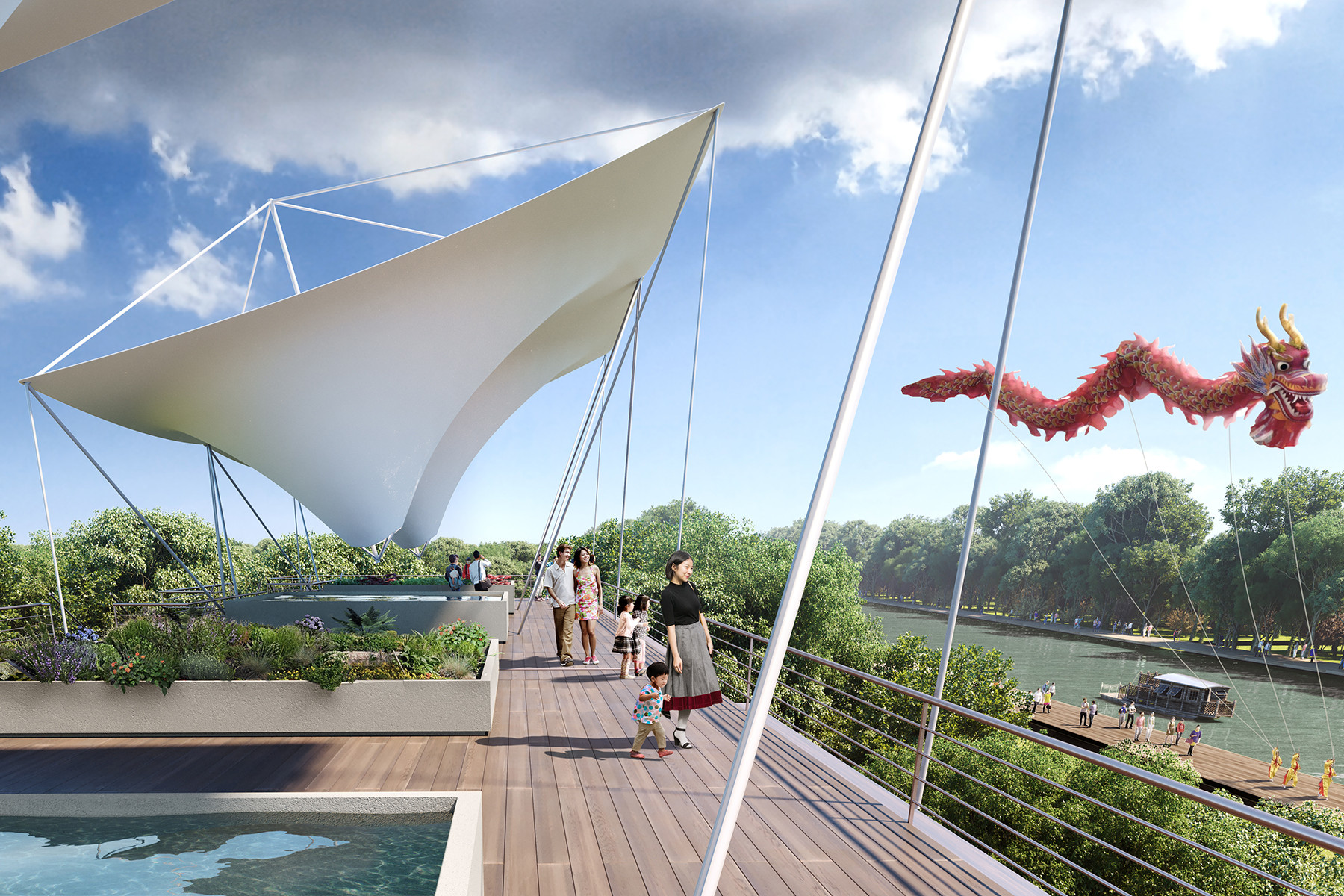 In recent decades, the City of Shanghai has been experiencing the most massive urbanization in human history. A globally connected seaport transformed by twentieth-century industrialization, its population rose from 18 million in 2000 to more than 27 million in 2020. Over the course of five years, it added vast suburbs accommodating five times the population of Atlanta, Georgia. Shanghai’s spread into surrounding farmland has been largely unplanned, led by private development opportunities and spiraling demand for housing. City leaders, grappling with the local effects of China’s accelerating growth and pivotal role in the world economy, asked a simple question: What could they learn from Western efforts to sustainably manage urban expansion? As part of this process of exploration and exchange, the municipality invited WOWA to propose a strategy for communities to be deliberately developed on the city’s outer edges.

WOWA devised a master plan for a walkable community of 5,000 people, integrated into the natural systems governing the river delta around Shanghai. Aiming for local self-sufficiency, we considered how to best utilize the terrain, abundant water, wind, and sunshine. We researched Shanghai’s urban history, identifying a row house typology that could adapt for the future, combining climate-responsive elements of traditional Chinese architecture with innovative technologies. Our design prioritized affordable housing in a dense configuration, oriented southward to capture solar energy, and integrating shared spaces, urban agriculture, and sites for social gatherings. We established principles of scale, experience, and other intangible design elements, along with infrastructure arrangements, in a flexible framework that can respond to a wide range of variables. The building system we recommended is rapidly replicable; standardized, manufactured components allow economies of scale and maximize resource efficiency.

We showed how Shanghai can manage exponential growth by working with, rather than erasing, the character of the surrounding countryside. Our vision for flexible, replicable, efficient, and healthy development responds to an urgent need for housing that fosters quality of life for communities caught up in dramatic social and economic change. It was studied by Shanghai’s municipal government and celebrated by US leaders in architecture and urban design. With its inclusion of public transportation nodes, dedicated routes for walking and cycling, and ample public space, our design provides a template for reducing reliance on cars and the social fragmentation associated with urban sprawl, promoting individual health and community well-being. Proposed net-zero-energy buildings, rooftop rainwater collection systems, and robust ecosystem services prioritize local resilience and minimize infrastructure investment—demonstrating possibilities for environmental integrity in the context of radically changing land use.